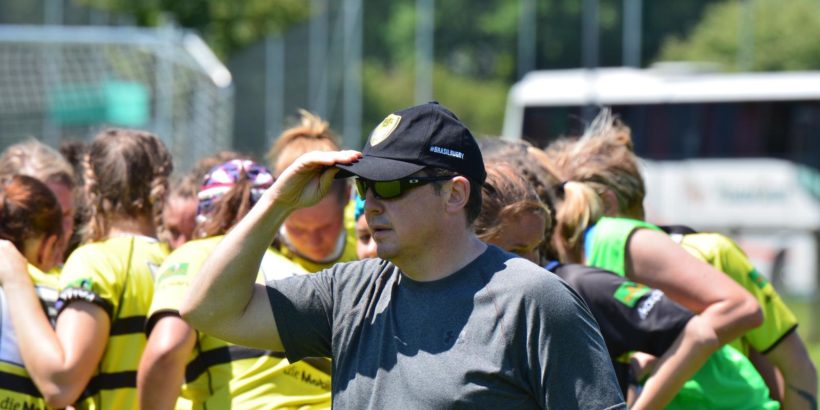 Full of confidence, the Dangels went into this semi-final against the fourth-placed Zurich Valkyries. The weather was great and many spectators supported the home team. The Dangels startet off well, after only three minutes they made the first try and Selä managed to convert. It looked like they could go through with their game against the Valkyries this time – unlike last time, when they drew 10-10. But then Zurich managed to build pressure, the Dangels gave away a penalty. The Zurich kicker turned it into the 7-3. Another penalty kick just five minutes later luckily missed the posts of the home team. What followed was a difficult phase for the Dangels. The Valkyries were mostly in possession of the ball. Finally, they made a breakthrough and went with 7-10 in the lead. But before half time the Dangels turned up again. In quick succession, they scored twice – after a long sprint from Jasi on the wing, the Dangels were able to maintain pressure so that Jasi could make the try in the corner. The second try was achieved by great runs and offloads from Ylva to Esti and finally to Judith, who was able to put the ball directly under the posts. At halftime it stood 19-10 for the Dangels.
The second half however, turn out bad for the Dangels. Fatigue set in, and they let the Valkyries dictate the game. Defending against the physically strong Zurich forwards needed a lot of strength. After a breakthrough, Tina could prevent the try with a spectacular tackle on the tryline. But shortly afterwards Zurich scored: 19-15. The Dangels did not return to their game, gave away several Penalties for high tackling, for which Oumou finally received a white card. Outnumbered, the Dangels vigorously defended their tryline, but finally the Valkyries made a try, including conversion. There were only a few minutes to play, Oumou came back on the field, but at the same time Mac was sent off. Although they gave everything in these last minutes, the Dangels could no more change the game. It remained at 19-22, and Lucerne thus missed the entry into the final of the championship.