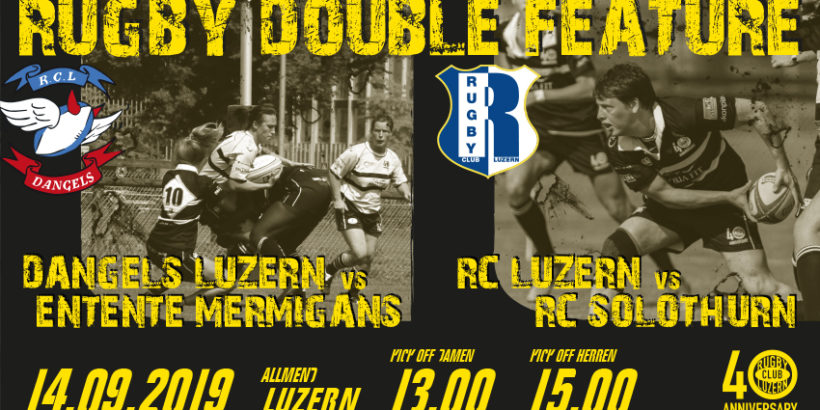 In their first home game of the season, the Dangels met the reigning champions from Nyon and Monthey in bright sunshine. As the week before, the home team had to place some players in unfamiliar positions. Still, they were full of energy and aggression – because after all, they had a reputation to loose: Never before had the Mermigans won a game against the Dangels. This should not change on this day.
The start went well, the Dangels made pressure from the beginning and showed good interaction. After about 15 minutes, Esti could make the first try. After Mac’s conversion the score board showed 7 to 0. And it went on like this: Mac scored twice, and also Chantal put the ball behind the line. Unfortunately, another try by Julia was not counted. Nevertheless, the Dangels were on fire in the first half of the game. At halftime the scoreboard said 22 to 0.
Unfortunately, things changed in the second half … The Mermigans made pressure and the Dangels were almost permanently in an exhausting defense. They held on for about twenty minutes, then the Mermigans scored their first try. Two more followed shortly thereafter. It stood 22 to 19 and the Mermigans were on the verge of stealing the Dangels victory. But the home team did not agree to that. The Dangels spun up again and pushed the Mermigans back to their tryline. Once, Esti almost scored, but unfortunately the ball slipped off her fingers before touching the ground. So it remained at the 22 to 19 for the Dangels – who celebrated the victory appropriately.
Tries: TazMac (2), Esti, Chantal
Conversions: TazMac
Horns: Esti (because her hands are too small)
Wings: Bea (great effort!)